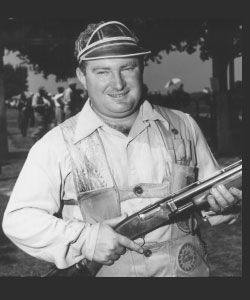 Arnold Reigger started shooting in 1942 and soon became one of the greatest legends of trapshooting. Arnold alone was responsible for the adoption of the 27 yard line which he soon mastered.

Arnold’s ability for concentration and control is unmatched. He shot in all kinds of weather and had a reputation for never pulling out of a shoot or turning down a target.

There are many stories about Arnold and one of the best is when there was a car put up as an option in Reno. Arnold’s Dad told him to go to Reno and win that car, He took a bus so he could drive the car home and he did!

These stories and many others, along with Arnold’s achievements will always make him one of the greatest legends of trapshooting