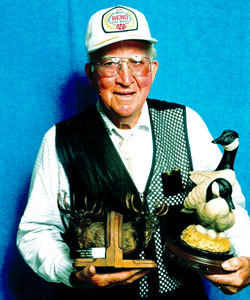 Robert “Bob” Dudley, known to his trapshooting friends as “Ducking Arrow”, started shooting registered targets in 1947 and by 1994 he had registered 400,000 PITA targets. In 1992 Bob had over 150,000 ATA targets. He was inducted into the Oregon ATA Hall of Fame in 1991 having won three State Singles Championships and one State Doubles Championship.

From 1950 on, Bob was a constant winner at the Oregon State PITA Championships and had many Grand Pacific wins. Some of his major wins include:

Bob Dudley has not only been a true sportsman and a great competitor, he is also known to lend a helping hand to any person or gun club in a time of need. It is people like Bob Dudley who make trapshooting a great sport. The secret to Bob’s shooting success, and his advice to all shooters, is to always “Keep the wood on the wood!”.