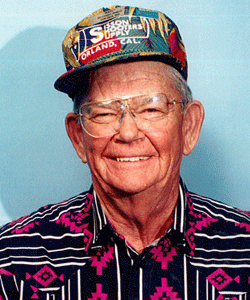 In 1945, after World War II ended, Denzel started trapshooting at the B.B. Orchards Gun Club in Wenatchee, Washington. Denzel and his wife, Letha, then moved to Lake Chelan, Washington and in 1952 they settled in Orland, California.

Along with his beloved wife, Letha, trapshooters could count on Denzel’s support and enthusiasm for trapshooting and the PITA. For years Denzel helped to organize many gun clubs. Anyone who has ever attended a shoot during that time would recognize Denzel and Letha at their vendor spot with anything trapshooters needed. He was the most familiar shooter and vendor that ever attended a trapshoot.

Denzel has many wins to his credit. The following are just a few:

Denzel made the Veterans All-Star Team 10 times. Through the years, Denzel was very active in the PITA. His contributions helped to make trapshooting what it is today. Denzel is one of the most deserving inductees in the Hall of Fame.