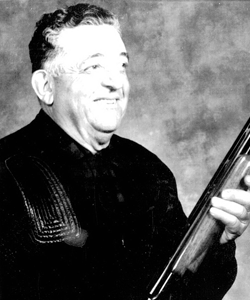 Anyone that has been a member of the PITA for any period of time should know the name Emanuel “Manny” Mingoia. Born and raised in the Livermore valley of California, Emanuel became an avid hunter and shooter at an early age. His love for shooting and shooting sports became very apparent when he became a charter member of the Livermore-Pleasanton Rod & Gun Club, formed in 1936. “Manny” as he was affectionately called, was the operating manager of that club for a period of nearly 50 years. Manny’s unselfish devotion to trapshooters was the strongest driving force in the club. His promotion of the organization was with undying loyalty, serving the shooter to ensure they were treated fairly and equitably, making it one of the most successful facilities if it’s kind in Northern California. Emanuel was President of the CSTA in 1966-67 and 1974-75; President of the PITA in 1967-68. He was also treasurer of the PITA for many years.

Emanuel’s extraordinary contribution to the PITA was in the administrative excellence area. During the 1950’s he assumed a leadership role in the PITA. Emanuel teamed with Ray Yasui and helped ease the PITA through some very difficult times. Together they guided the PITA from a small, almost club-like organization, into a truly international association with strong activity in the USA, Canada, and South Korea.

In the 1970’s, as a result of some strong internal turmoil, the PITA approached collapse. Emanuel and Ray were instrumental in initiating a drastic change of the PITA from a clique-dominated organization to it’s present form of democratic management.

Not only was he heavily involved in the leadership of the PITA; he was a competitor as well. One of the most notable accomplishments during his shooting career was winning a new Buick Riviera at the Riviera Gun Club in Las Vegas. Another win to his credit was the class HOA at the Grand American in Vandalia, Ohio in the late sixties.

Emanuel participated in every one of the State and Provincial shoots that he could and was known nationwide as “Mr. PITA”. Manny always said that he had three loves in his life: his family, especially his loving wife Roma; the Livermore-Pleasanton Rod & Gun Club; and the PITA.