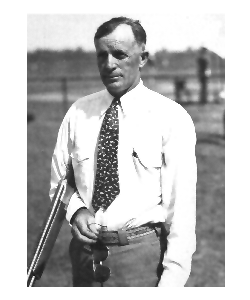 Ted Renfro was from Montana and was one of the three people that helped start the PITA, O.N. Ford’s letter that is in the Hall of Fame room indicates that J.O. Cotant and Ted Renfro were there to help O.N. Ford get this organization on its feet. Renfro was successful in brining Montana into the PITA; it seems that after Ted quit shooting in the mid 1940’s, Montana kind of drifted away from the PITA.

At the Grand pacific he won the handicap with a score of 98×100. He also was the HOA champion with 871×900. The Grand Pacific also had handicap special trophies. Ted was the only person to win all of these trophies: The Rogue River, The Klamath Lake Hunting and Fishing Club, and the Charles Lindermann Trophy.

Ted completely dominated in Montana, he was also one of the original people to donate a perpetual purse of $ 50.00 for the Montana State Shoot. His averages were high even for today’s shooters, but they were truly remarkable for the time period and Ted deserves to be honored by the PITA Hall of Fame