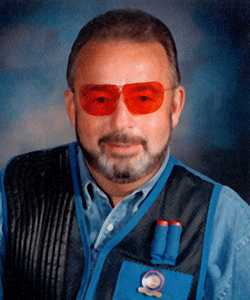 Bert started shooting PITA targets in 1966. He progressed rapidly and was on the 27 yard line by 1969. Bert has been on the All-Star team seven times. His averages were high enough to be on the team many more times but he lacked sufficient targets in one or more categories. Bert was not able to attend several State shoots and Grand Pacific’s because of his position as labor manager with Willamette Industries. Even so, Bert has shot at over 120,000 registered PITA targets.

Bert has served as President of the Salem Gun Club and was instrumental in the move from downtown Salem to the location north of town in the 1970’s. Bert is one of the few PITA shooters to complete the Grand Slam

At the time of his induction, Bert had 35 wins at the Oregon State Shoot, 12 Oregon State Championships, many wins at the Grand Pacific including HOA in 1991 and the Doubles Championship in 1995. Bert is one of the most consistent shooters in the PITA with an overall average of 94.34 from 1979 through 2000.