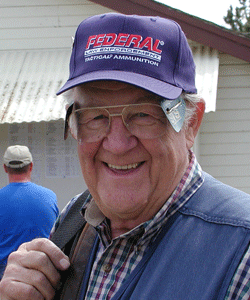 Del began shooting at the Cottage Grove Gun Club in 1963. To date, he has shot over 150,000 PITA targets. In 1968, Del made the 27 yard line. Prior to that, in 1967, Del made the PITA All-Star team for the first time and has accomplished this feat 8 more times since. Del has also been Captain of the Veteran’s All-Star Team twice. Del has many wins at the PITA Grand Pacific and the Oregon State Shoot, as well as a number of other shoots. Del has shot AA-27-A since 1968.

Two events that stand out in Del’s shooting career are shooting with Dan Orlich on his 400×400 squad and his first Oregon State Singles Championship win in 1966. Del’s backer record is also outstanding especially when teamed with Art Gwinn, Bob Bounds, or Carrell Whitehead.

Over the years Del has served on a number of gun club boards:
• Cottage Grove for 15 years
• Salem for 4 years
• Bend for 4 years
• Oregon State Trapshooting Association for 3 years
• Del served as the President for one year each on the Salem and OSTA boards.

Over the years, Del has assisted many a new young shooter. He gives of his knowledge freely and enjoys seeing young shooters progress. Del’s philosophy is: If you help a new shooter get started you will never have a bad shoot – one of them will almost always have a win.

Del’s major partner through the years had been Doloras. She has been a silent partner, without whom Del would not have achieved his present status.