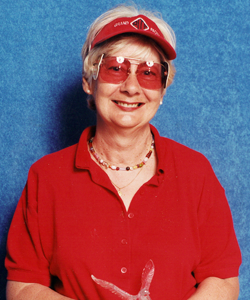 Pat was asked in May of 2004 what she considered to be the highlights over her 34 years in the PITA. Initially she answered that it would be her HOA and HAA at the Grand Pacific. Later she said no…that it was really the friendships and the camaraderie.

Pat began shooting trap in 1967. Her own list of success as a shooter is lengthy and impressive. “Lady Champion” and “High Lady” appear repeatedly in the stats between 1982-2002, at shoots all over the Pacific Northwest. Pat’s 1991 achievement of Lady Champion HOA and HAA at the Grand Pacific is truly a “Grand” accomplishment. Closer to home, Pat has been Lady Champion at the BC Provincials five times.

Pat’s enthusiasm is unmatched. Scores are only one measure of a sports achievement and though Pat is impressive, the lasting legacy will be her service to our sport and its participants. Pat treasures the “Attaboy” feeling she gets from giving everything she does her best effort. A quote: “If you have a happy heart, in anything you do, you can excel”. Pat has made a difference