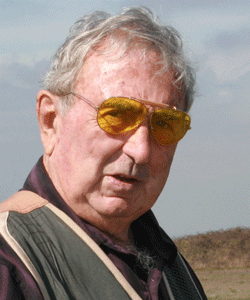 Jack was born in Portland, Oregon in 1927 and was raised in Canby, the only child of Curtis & Cleo Leonard.

Jack and his wife Jean have been married for 56 years. They have 3 children, 11 grandchildren, and 2 great-grandchildren. Their sons, Curt and Greg, have also shot targets through the years.

Jack attended Linfield College in McMinnville where he played tennis, football and basketball. Jack made a living in home construction and continues to build one-story homes to this day.

He picked up a shotgun at the age of 9 to hunt birds and his first targets were shot at the Canby Gun Club in 1947. Jack is proud of his 3 year run as the Singles Champion at the Oregon State Shoot. Over the years he has been an avid hunter and fisherman as well as a trapshooter.

As you might expect of a life-long shooter, Jack bought the McMinnville Elks gun club and then built the family home next to it.

Jack appreciates the honor of being inducted into the PITA Hall of Fame and we welcome him.