In 1982, Lisa was introduced to the sport of trapshooting by her Dad, Art Salt. Lisa quickly decided that this was going to be the sport she was going to focus on. A true competitor, she is also a top Real Estate agent in her home town of Vernon, British Columbia. Lisa quickly rose to the top of the trapshooting ladder in 1983 by winning her first Provincial Singles Championship. She has won that title 7 additional times as well as the HAA 10 times and Ladies doubles 12 times. Lisa hit the 27 yard line in 2002 and has 6 100 straights to her name so far. Lisa shot her 100,000th target at the North Okanagan Trap & Skeet Club in 2004. Sixteen years on the PITA Ladies All-Star Team, Lisa achieved the top spot in 1993,1994 and 2004. In 2001, she held the high handicap average for the Province of B.C. While attending the University of British Columbia in Vancouver, Lisa concentrated on International Trapshooting. In 1985, she won a bronze medal along with her two teammates at the World Trapshooting Championships in Montecatini, Italy. Lisa’s trapshooting career highlights include traveling around and shooting all over Western Canada and the Untied States with her Dad. She specifically recalls a shoot in Las Vegas where she and her Dad won 13 trophies. Over the years, her “family” of trapshooters has grown to include not only her Dad, and her brother-in-law, Bruce Davies, but also her sister, Terry Davies, three of her nephews and now her husband, Gord Fowler. Lisa is the youngest addition to the Hall of Fame thus far, and we congratulate her for her outstanding accomplishments. 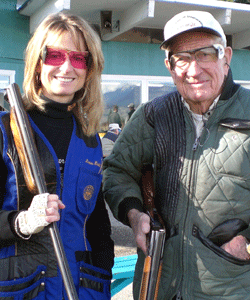 Growing up in the Depression, Art was an entrepreneur at heart. His childhood pastimes catching gophers and laying railroad ties eventually turned into the more lucrative businesses of real estate development and car, truck and heavy equipment sales. Lucky thing—Art shot his first registered shoot in 1953 and he was going to need the money! Art has been an active member of a number of trap clubs, most notably one of the original life members of the North Okanagan Trap & Skeet Club. He was one of the founding members and has donated not only traps and voice calls, but his equipment, his manpower and more than anything, his time. Art is responsible for running most of the practice at the club for the last 45 years. He was President for 8 of those years and a Director since its inception in 1962. Shooting 6 100 straights and 43 99’s in PITA targets alone, Art’s successes in trap have been many. In 1992, 1993, and 1994 he was on the PITA Veteran’s All Star Team. In 1994, he was in the first position on the first team. Art made the 27 yard line in 1976. One of Art’s memorable shooting highlights occurred in 1962. He fell onto some tough times in business and was unable to shoot that year. One weekend, he decided to go and say hello to his friends, He was talked into shooting the handicap, walked up to the line, shot a 98 and took all the money. Another notable win was at the B.C. Provincial Championships in 2003 at age 81. Art put together a 99 in the handicap, three targets over the next score, and won the Handicap. In September, at age 84, Art will be shooting his 200,000th target at Vernon. A true ambassador of the sport, we welcome Art into the PITA Hall of Fame.